The ERS-110 is the first commercially produced AIBO and the first entertainment robotics offering from Sony.

After the creation of the 1998 prototype by the Digital Creatures Lab, Sony decided to peruse a limited commercial release of a refined AIBO robot.
The Sony AIBO ERS-110 was released in May of 1999 and was offered exclusively online in the USA (2,000 units) and Japan (3,000 units.) The robot sold out within 20 minutes in Japan and over the course of 4 days in the United States. 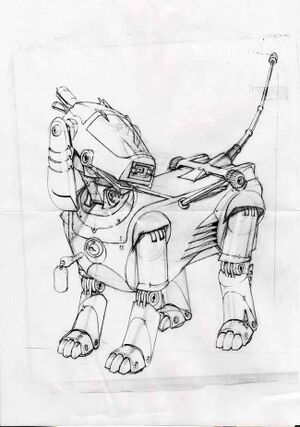 The ERS-110 was designed by artist Hajime Sorayama for Sony and won the Good Design Award Grand Prize in recognition of Sorayama's design and Sony's execution.

While the ERS-110 and ERS-111 are nearly identicial appearance-wise, there are some notable differences that can be used to tell them apart. The body of the ERS-110 has a gold tint, the ears are rounded on both bottom edges, and the tail is longer.

Make sure you enter all the required information, indicated by an asterisk (*). HTML code is not allowed.

Images may be subject to copyright of their respective owners.

All rights are reserved unless otherwise stated.  E&OE.